Following the intense battle for the Primasole Bridge in which Lt-Col Geoffrey Willis was killed, Lt-Col A.A. (Sandy) Cameron arrived from 4CLY to take over command. 3CLY were then called on to support 50 Division in their advance up the east coast of Sicily through a narrow strip between Mount Etna and the sea. However this area proved very difficult for tanks both because of the outcrops of lava from the volcano or through demolitions along the coastal road. Eventually the main effort was switched to the west side of Etna and taken up by fresh divisions from N Africa. C Squadron took part in a seaborne hook to capture Messina but there too the British were held up by demolitions and they finally reached Messina only to find the Americans already there.

In the morning a dress rehearsal for the Brigade Commander's inspection was carried out by the CO. The Regiment was lined up in Squadron columns:- RHQ & Recce, A, C & B and A1 Echelon and the march past was taken by Lt Col AA Cameron DSO MC, in that order. All the tanks were lined up in A Sqn area in the following order:- RHQ, A, C & B. The rest of the day was spent in making final arrangements for the visit of the Brigadier.

At 0730 Squadron markers fell in under the RSM and the Squadrons marched on at 0740, lined up in the same order as yesterday. The Brigade Commander, Brigadier JC Currie, DSO MC, then inspected the personnel of the Regiment at 0800 and after taking the salute proceeded to inspect the tanks and other vehicles. The Regimental area was afterwards inspected. The inspection lasted until midday when the Brigade Commander had lunch with the Commanding Officer. During the afternoon the Brigadier visited B1 Echelon, which was approximately 1½ miles away, and inspected personnel and vehicles, this inspection lasted about 2½ hours ending at 1630.
The following congratulatory message was later received from Brig JC Currie, DSO MC:-

"I shall be grateful if you will convey to all Officers and Other Ranks my congratulations on the very excellent turn-out on your parade this morning and my thanks for all the very hard work that everybody had obviously put in to achieve it. In these days when many people, supported in regrettable manner by certain sections of the Popular Press, profess to decry the importance of discipline and turn-out, it is most encouraging to find that in the best Regiments there is still that spirit which ensures the truth of that saying that we all know so well, that the best turn-out and best disciplined Regiments are the best fighters. It is the unpleasant duty of an inspecting officer to try and find fault, but finding occasional minor faults does not blind one to the general standard and I wish to congratulate you on the spirit displayed and thank you all for a most enjoyable day spent with your Regiment."

Comment : It is noticeable from Jimmy Sale’s photographs how, from time to time, the Regiment was expected to smarten up for some ceremonial occasion. Even after having been in action for a long period, they had the ability to turn themselves and their tanks out in immaculate order, all men smartly and uniformly dressed and tanks cleaned, repainted and polished 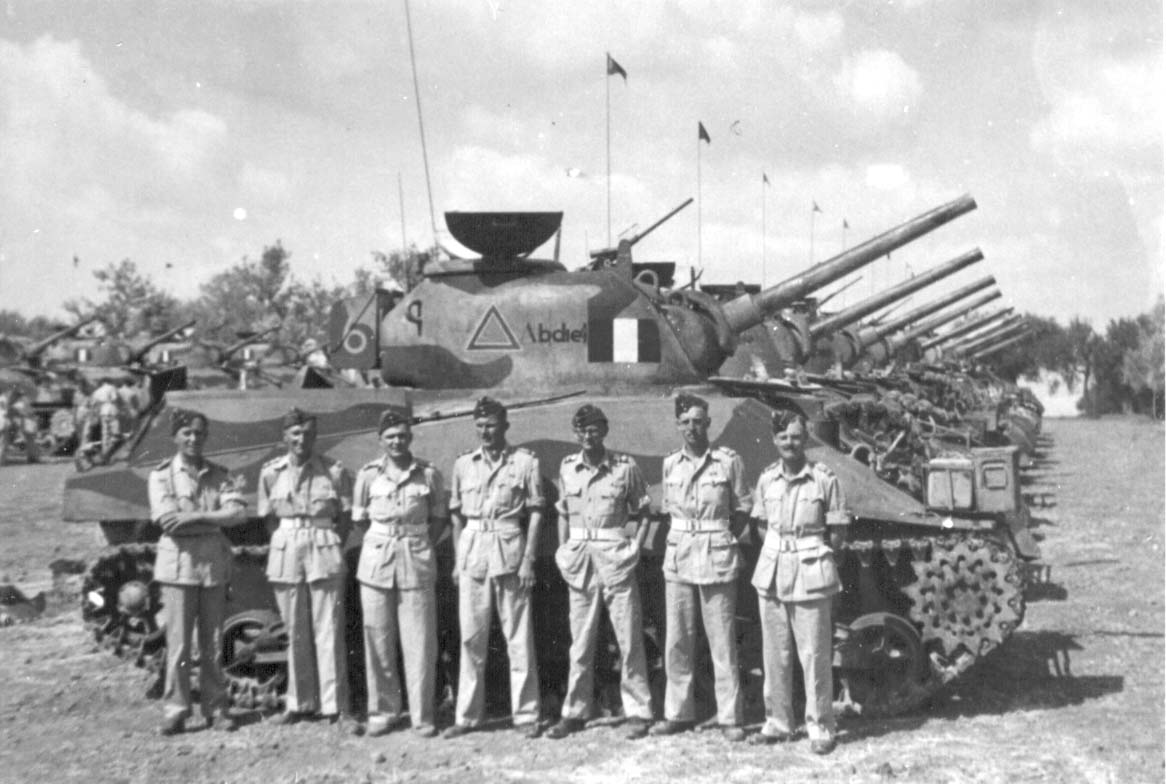