The advance of 3CLY up the East coast of Italy during Sept-Dec 1943 involved a series of river crossings, all of which were defended by the Germans to a greater or lesser extent. Added to this the Regiment faced appalling weather and suffered serious losses of tanks either bogged down or from enemy fire. When the weather eased they were able to ford the river but then faced the main enemy defensive position on an escarpment a mile to the north. This was eventually, on 29-30 Nov, taken by a set piece infantry attack with 3CLY tanks in support. It was during this battle that CSM Raymond Bryant was awarded the DCM for his gallantry in fighting off enemy infantry attacking his Troop Leader’s disabled tank, the DCM which the regimental museum was recently able to buy at auction.

The Regiment broke leaguer at mid-night, order of march B Sqn, RHQ, A Sqn to the lying up area 447883 where the Regiment again leaguered. The Recce Tp with the fitters under command Capt. Jackson leaguered in area 442003 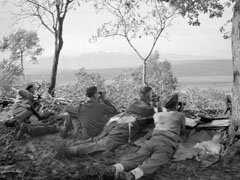 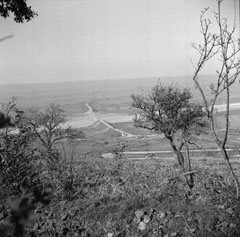 Officers and Sgts of A Sqn 3CLY at the Op          View from the OP, the Sangro Valley and the destroyed bridge

A Sqn and RHQ remained static the whole day. B Sqn (15 tanks strong) moved off at 0630 under command Capt. JL Aitken MC, to cross the river OSENTO at 446001 but the diversion was not ready and they were unable to do so.

A Sqn moved about 1 mile south of TORINO 445936 and B Sqn moved to another lying up area 439002 and crossed the OSENTO at 446001. From here 2Tp and 4Tp moved forward to try and cross the SANGRO at 426016 but only 2 tanks of 2Tp managed to get across owing to the state of the bridge. At this time the ground was very bad and the remainder of the tanks were pinned to the road between bogged tanks at 440020.

A Sqn still remained static. 3Tp of B Sqn moved South along the road to contact C Sqn to cross the river by the mill 41996 but were unable to do so.
Casualties through shelling:-

A Sqn still static and B Sqn made an attempt to recover some of their bogged tanks but had no success.

There were no further developments on either front and the time was spent with the bogged tanks.

B Sqn were shelled in the morning and in the late afternoon. The Sqn with all its runners were to cross the SANGRO with a Sqn of the 50th RTR but owing to one of their tanks getting bogged no attempt could be made until the REs had mended the crossing at 410993. Another attempt was made with the bogged tanks and two tanks were recovered. RHQ and A Sqn crossed the OSENTO at 446001 and leaguered just West of the bridge.

B Sqn moved off at 0545 to cross the SANGRO at 410993, 11 tanks got across successfully and moved up to 402009, where they leaguered under the escarpment. RHQ and A Sqn followed and leaguered in the same area. There was some shelling of A Sqn and Tpr Casey J was injured. The Regiment less C Sqn remained there for the whole day. 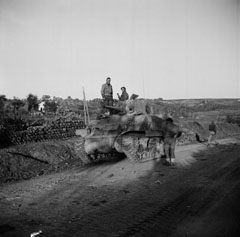 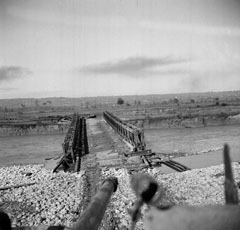 alongside a dump of artillery

The Regiment rested under the escarpment and were joined by C Sqn. Capt. Jackson's party crossed the SANGRO at 441028 and joined the Regiment.

The Regiment moved out from leaguer at 0430 to lead the Brigade on an attack up on the R.Li COLLI feature (3702). B Sqn leading, RHQ, A & C Sqns. The Regiment joined up by squadrons, with their supporting infantry companies behind them (6th Royal Inniskilling). A barrage opened at 0555, lifting 100 yards every 4 mins then halting. The Regiment advanced close behind the barrage (150 yards), in column of squadrons. B Sqn ran into a minefield at 3802 and 7 tanks were rendered immobile by mines. A Sqn deployed a troop to the left, 2 of these tanks going up on mines. C Sqn led now to the right and found a way up to the R. Li COLLI feature, and here the REs cleared a path through the minefield. The whole of these activities took place among olive trees, and the sniping was very bad. C Sqn then established a firm base on the top of the hill facing FOSSACESIA and then A Sqn passed through and faced West, linking up with A & C Coys of the RIF. A Sqn then advanced straight over the enemy defences and reached the outskirts of S.MARIA successfully. The most awkward part of the attack was crossing a boggy field where 5 out of 12 attacking tanks were stuck. On reaching S.MARIA the column halted and a patrol of 1 Plt of RIF and one troop went into the village, which was found to be deserted except for 1 German officer and 23 ORs who were hiding in a cellar, these were taken prisoner. At last light the ASH took over the defence. C Sqn leaguered with RIF, no further tanks coming up. 2Tp of C Sqn were fired at by two 75mm guns, these were destroyed without loss.
Casualties:-

Meanwhile, while static below the escarpment, the Recce Tp were heavily mortared and suffered the following casualties:-

B Sqn who had a large number of tanks bogged, spent the day trying to recover them. The remainder of the Regiment, consisting of A & C Sqns with one troop from B Sqn were then given the two-fold role:-
To protect the 44th RTR left who were attacking FOSSACESIA.
To cut the road ROCCA - FOSSACESIA.
The attack by 44th RTR was entirely successful, and the Regiment were not engaged except for a half-tracked vehicle destroyed at 377085 by C Sqn who also took 50 prisoners, 20 horses, 1 mortar, 4 LMG and 1 range finder. The Regiment leaguered for the night at 390051.
The Recce Tp still under the escarpment, were attacked by enemy aircraft and suffered the following casualties:-

The Echelon which was close by the Recce Tp had the following casualties:-
Tpr Harris C -Killed
Tpr Henigen E -wounded.

There was one more river to cross, the R.Moro, which was achieved against strong opposition on 5/6 December. 3CLY continued in action for another fortnight before they were able to concentrate on celebrating their third Christmas away from home. On New Year’s Day 1944 came the welcome news that they were to return to England to prepare for the Second Front.