3CLY had landed at the port of Taranto on the ‘instep’ of Italy on 22 Sept 1943. For the next four days they advanced northwards towards the east coast towards Foggia and San Severo. The war diary gives a detailed account of the action which took place during the advance of 26/27 Sept 1943

The vanguard formed up at first light with Recce leading, with 1 Troop of armoured cars and six carriers. These were followed by one troop of A Sqn plus an OP in a carrier, Sqn HQ and reserve troops. Delay was caused by the difficulty in netting with command on to Regimental and A Sqn freqs. The column started moving at 0600 and continued its advance on FOGGIA via CERIGNOLA. The leading Sqn having passed through CERIGNOLA, deployed and advanced to X-roads North of ORTA NUOVO 4505 where the column halted, had breakfast and sent out patrols. Bridge over river CARAPELLA was found to be blown and from local information and the appearance of a German M/C it was apparent that contact with the enemy was about to be made. The advance was resumed and carrier crews (56 Recce) forded the river on the North side of the bridge. Local enemy machine gun fire being neutralised by the guns of the tanks of the leading Sqn. Remainder of vanguard then forded river, deployed on either side of road and continued the advance.

Contact was made with 2 armoured cars from the Northern column at track junction 4309 where it was learnt that 2Tp of A Sqn commanded by Lt RC Roberts MM had destroyed an enemy armoured car. The advance continued towards the river GERVARO which was the final obstruction before reaching FOGGIA. To the left of the road covering the bridge over the river to the South was a large wood which stretched south about 1½ miles to SANTE DEL INCORONATA. Opposition was expected from the wood and was met. A Sqn deployed one troop of tanks well to the left to demonstrate against the left flank of the wood in which movement of enemy vehicles could be seen from time to time. At approx 1½ miles SE from the woods the road was registered by heavy mortar fire. One tank of A Sqn was hit by mortar fire which damaged the 75mm gun, slightly wounding the commander Sgt King in the eye. It was observed that the enemy was holding the wood in some strength and as the approaches to the wood were completely uncovered a halt was called in order to make a plan. The plan was formed in which the independent Coy of Air Landing Brigade was to go round the left flank of the wood and enter it. The movement was covered and supported by the left hand troop (4Tp) of A Sqn. 4Tp consisted of 2 tanks and the Tp Cpl sighted an 88mm gun which had come out of the wood and got into action. This troop destroyed the gun, killed the crew of 5 and blew up its ammo lorry.

At 1700 the carriers, which had been very slow, reached the river and the Independent Coy on the left got within reach of the wood. A Sqn then advanced up the river between the wood and the railway, shelling enemy MG positions and the enemy were seen to be moving, leaving the wood and getting away across the river. Light was failing by this time and it was seen that the bridge was blown. The Regiment then leaguered some two miles back at 5524.

Intention to cut the FOGGIA - MANFEDONIA road. The centre line was TRINITAPOLI, X-road 6016, junction 4832. C Sqn were ordered to cross the main road running North from CERIGNOLA as early as possible. Point 5325 was reached by 1100 after having found bridges blown at 6214 and 5423. The bridge at 6023 was also reported blown by 3Tp where one if its tanks (Sgt Clausen-Thue) was blown up on a mine thus losing a track. Two troops then moved North to find that the bridge at 5129 was also blown and were fired on by an 88mm on the North side of the river. All 3 tanks of 4Tp were ditched in the confusion and one of 2Tp. 1Tp made two attempts to recover the tanks but this was found impossible due to enemy fire. The Sqn then to leaguer at last light area 5524 having knocked out the 88mm gun and one Mark III tank and 1 ammo lorry.

The advance was continued 15 minutes before first light and the wood was reported clear by infantry patrols which had entered it during the night. At 060 the bridge was reached and found to be blown so a crossing was found which involve a detour of over 2 miles from road to road which caused some delay. The advance was then continued rapidly to FOGGIA where the road was again found to have been blown. A way round to the left was found and the town was entered, which had been very much knocked about. RHQ established themselves in the central square which was later taken over by the Independent Air Landing Bde. Lt KC Kiddle and 4 scout cars were sent forward to Recce the road into SAN SEVERO. The approach into the town was down a dead straight road for approx 5 miles and at map ref 158427 Lt KC Kiddle's car was blown up by A/Tk fire from an 88mm just on the outskirts of town. The second car was hit simultaneously, the third car tried to pull off the road and was also destroyed and the fourth car reversed for a few hundred yards, became ditched and was also destroyed. The casualties in the action were:-

Replenishing was done at first light and then C Sqn moved down centre line ONORANZO (4521) - FOGGIA led by a troop of A Sqn Royals. FOGGIA was entered at 1000. Contact was then made with the remainder of the Regiment and then went to leaguer 3316. 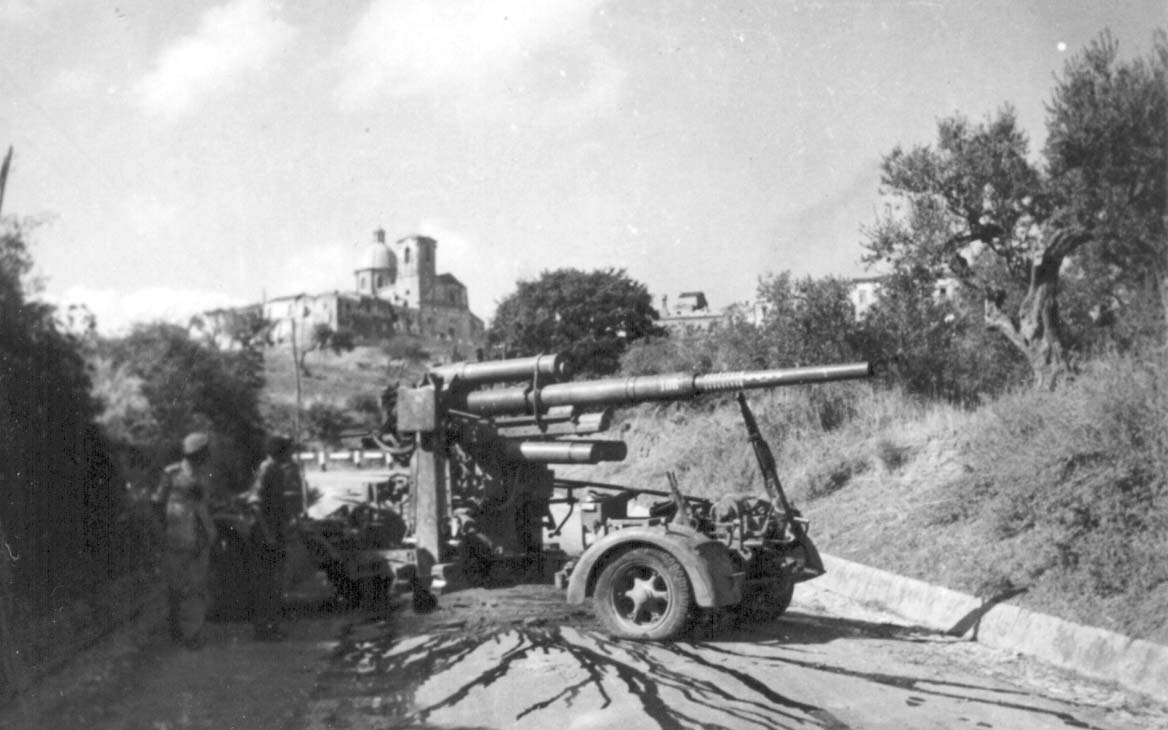 Comment: There were two sequels to this account. As 3CLY approached the outskirts of San Severo, a German 88mm gun was knocked out by A Sqn 3CLY. Painted on its barrel were four British scout cars, which, as described above, had been knocked out as they approached Foggia. Once in the town itself, CO 3CLY, Col Cameron learnt from the Mayor that the bodies of the crews of the scout had been taken to the local church and on the following day they were given a funeral with full military and municipal honours.

Today a visitor to the town can still see the monument inscribed:

of the four valorous English soldiers

by the sacrifice of their lives

Gone but not forgotten